I'll continue where I left off from yesterdays Blog post, especially since I havent posted too much this year. Its long but a worthy read. Grab a cuppa and sit tight.

When I find inspiration from something or someone, that lifts me out of the bunker I've taken up shelter in too long, it always causes me to want to find where its own genesis culminated.
I need to pop the hood, unscrew the back plate, pry open the manhole cover, grab a pick axe and shovel to dig..whatever is needed to get to the base of its existence to better understand what makes this muse I've discovered, tick, as it were.

Thanks to Momo from themomozone.com
He has taught me that its imperative to Move forward when inspired, to "do something NOW!" because 100% action = 100% reaction, 100% of the time.

so.. What do you then begin to work out in your own formations of creativity that characters like these (Deke and TK from the last blog) have inspired, with the skill set you possess? Is it enough for you to just accept their art and put it on a shelf to admire, or
do you meditate on it, wade into it all the way up to your nose so that it saturates you and begins to influence your response to things around you
that you have become too comfortable with or have taken for granted?
In my own life I often become a Jack Skelington of sorts from the animated holiday flick "A Nightmare before Christmas" when he stumbles mistakenly into
the land of Christmas time and it possesses him. He has to tear it all apart to understand it and wants to recreate it in his world.

Does this make sense?
Here's a for example; every morning I get up and
walk over to the kitchen sink to fill up the tea kettle with filtered water.
Then I light the stove, let the water heat up to a boil. I take a mug from the cupboard, tear open a packet of organic Numi Gunpowder green tea and drop it in the mug and pour the water fresh off the boil into it. 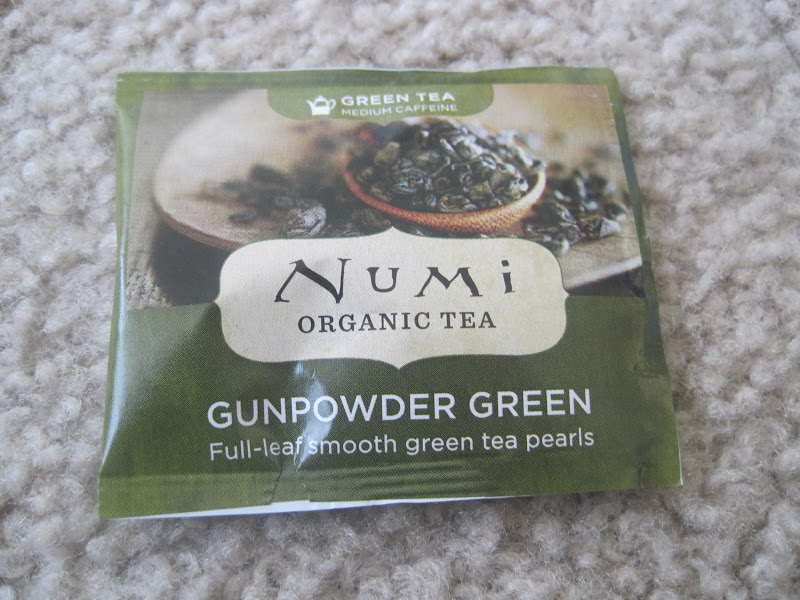 I'm on auto pilot and yet everytime I have that first mug of tea, I savor it and
remind myself that I will survive my second year of being coffee free. Its ritual.
Then one day I'm off on a business trip up in Truckee and I stumble into some dumb hippie whole foods store to avoid the evil Starbucks for the masses.
I find the cafe in the back and order what I know, what I am both familiar with and comforted by.
The ritual.. my Gunpowder organic tea. Except this time and in this new environment the tea has a different company name. More eyebrow
raising as it is handed to me with two sticks across the top and a strange hammock looking tea "pouch" of sorts and its filled with what looks like, balls of leaves rolled up. I sit at my table, checking my email and glancing back at the
weirdness in my cup. Its like some sort of vegetational hairball from rabbits, and its starting to expand in this funky tea hammock. I feel confused and am sure
these crunchy granola people got my order wrong like some bad episode of
Portlandia.

I go back to the counter and tell them, I asked for gunpowder green tea. They smile and begin to inform me that Gunpowder green tea is actually whole leaf tea that is picked from the plant and immediately rolled up into tiny
balls.

I did not know this, even though every single day of my existence I was already having this very thing. Albeit in a less exotic packaging and the tea balls in the Numi Organic Green Tea must be micro sized.
Now I have to go home and read about it, and I want to recreate the same little experience I had up on hippie mountain. Now the morning process of procuring said hot beverage is more involved. I found my "loose leaf" version of Gunpowder green tea in rolled up balls, but it came with toasted rice. Now I have to find out what the hell toasted brown rice is doing in my tea.. I discover its a very traditional thing and my interest in this new process is piqued.
Inspiration has struck within something I was already involved in. the Tea was there, the boiling water, my favorite thin lipped and heavy based mug, all there and known..
But now there is this new way of doing it, new media and a muse
has arrived to spurn my morning ritual into an experience. Plus now I dig this side note in the tea, the toasted brown rice. I want to find out when this started, did the Japanese come up with it first? I love Japanese culture, I love
japanese women, I love martial arts and have since I was kid in high school studying Goju-Ryu karate, a mix of Okinawan hard style and the softer Kempo style....
The rabbit holes start appearing from this simple shift in what I was already doing. Then I wanted to start digging to see whats down in there!! For me as a singer, songwriting, guitarist kind of musician, with a business on the side making guitar pedals and amplifiers.. I was already waving the banner of support to independent craftsmen and trying to keep my own consumerism as american based as possible.  I was already passionate about vintage roots rock, hotrods and the atomic era. I was immersed in making products that rockabilly, honky tonk, surf, and tiki culture were heavily influencing in my own hobbies and music craft.
I already was very familiar with and constantly listening to music by Deke Dickerson and Big Sandy in my Ipod rotation of shop tunes. I just wasnt
aware that these very artists; Deke and TK Smith were sharing their own muses in their creation. When I woke up to what these cats did outside of strumming and singin, the lights were turned on and I got tuned up.

The obsession and side roads (rabbit holes) led me to create my own guitar build ideas, using the info shared on the Bigsby Files blog, the Paul Bigsby book and TK Smiths blog plus his personal time to help me put some cool guitar hotrodding into effect. 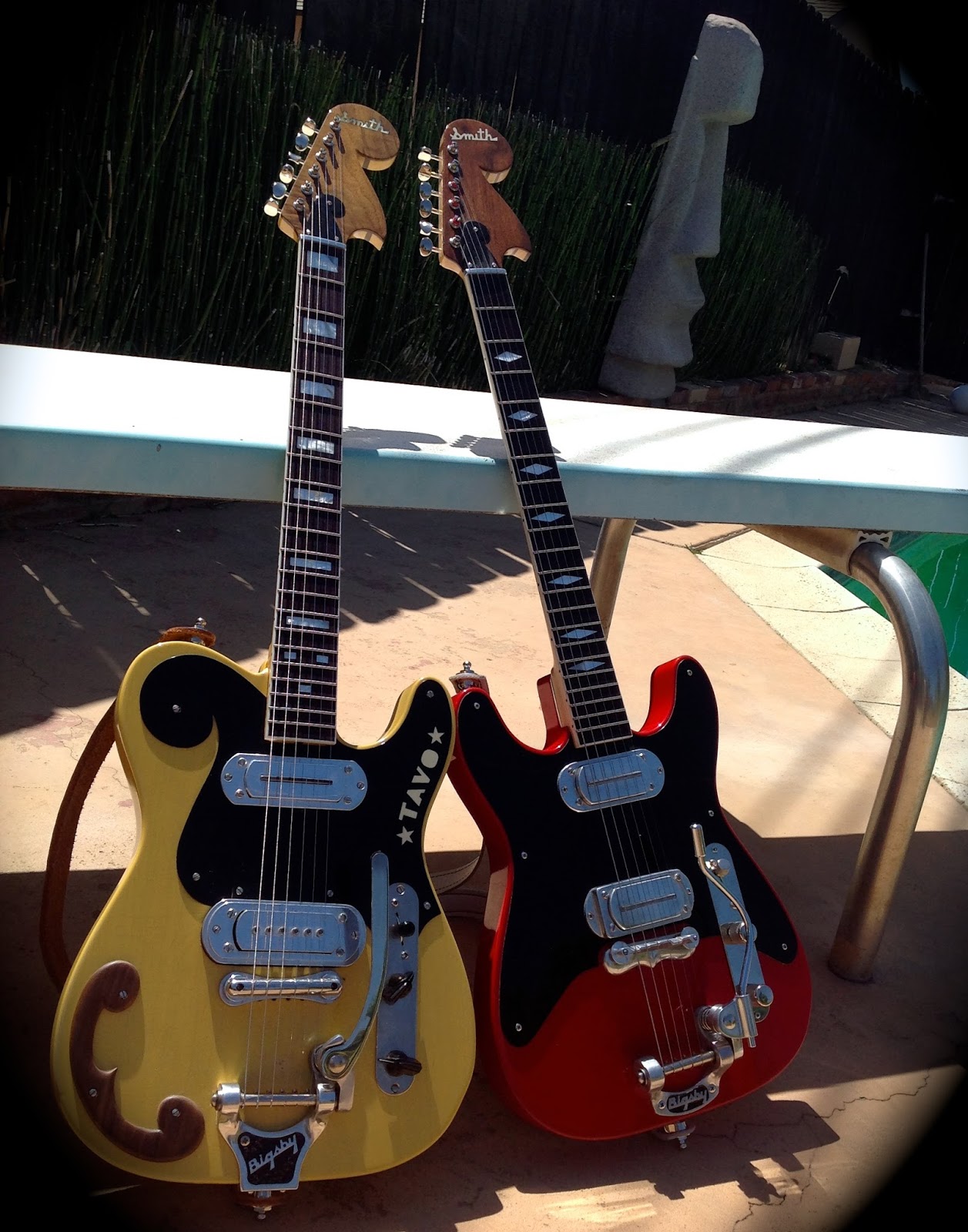 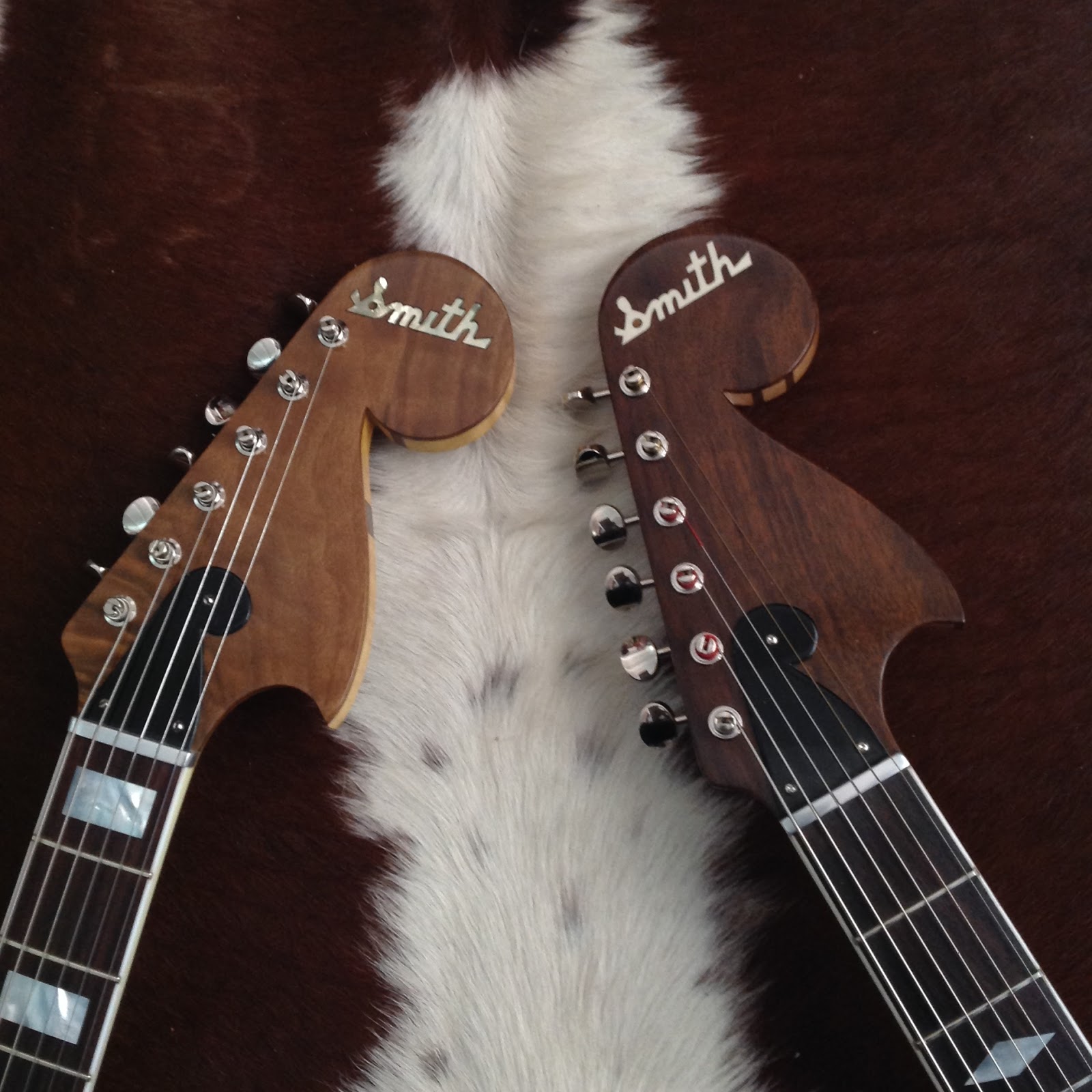 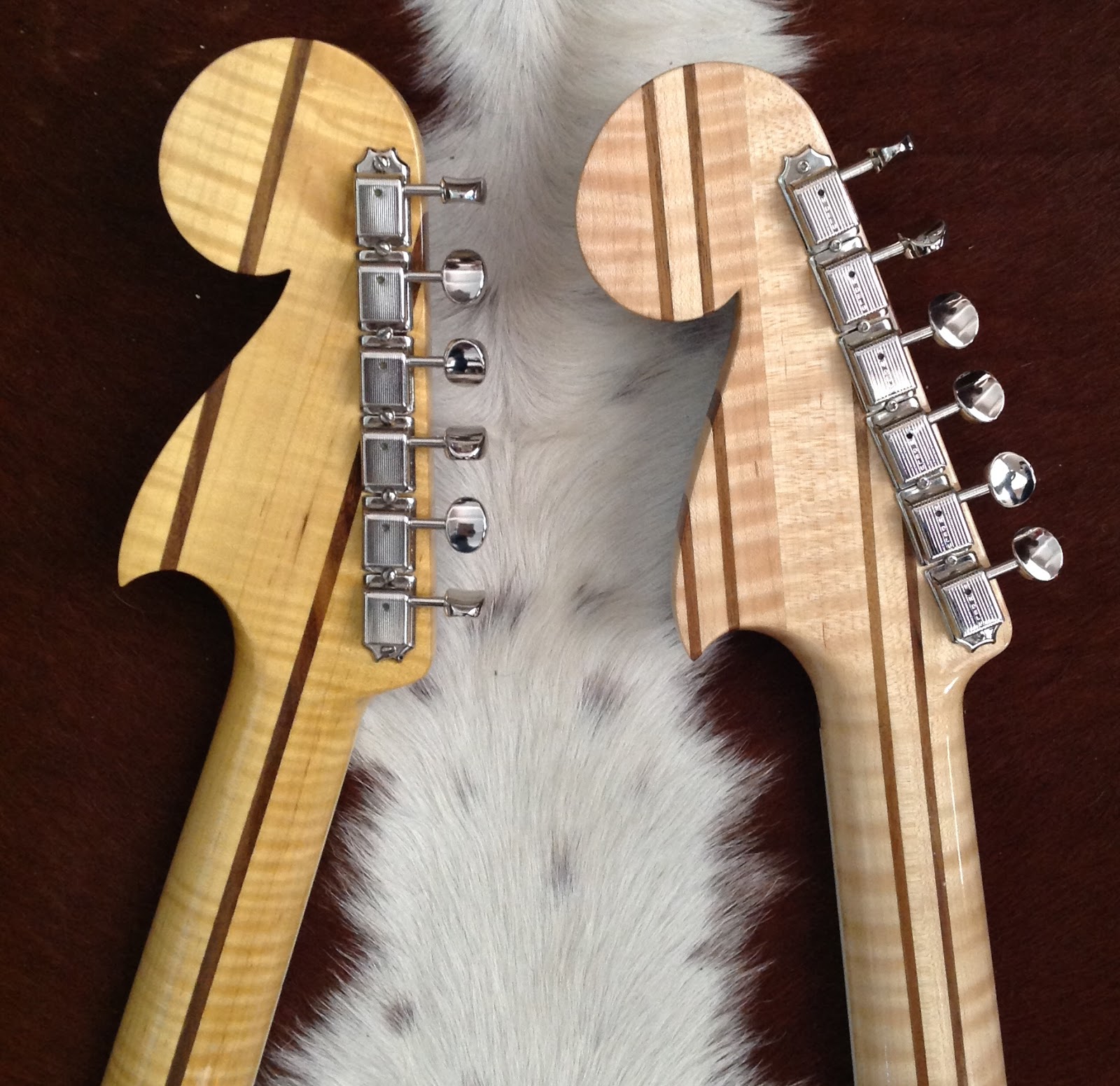 As you can see, I've been busy man making stuff. Creating and learning, listening and evolving. Seeking out the musicians to whom PA Bigsby was building for and drinking in those cats music and influences. Paying attention to their recordings and their tone and their attack. I want it in my blood and the transfusions are taking. :) Now I have this mutation in my soul of rockabilly, honky tonk, funk, jazz, punk, bluegrass, western swing, bebop and jump blues pumping through my veins.
TK Smith primed it with his passion for recreating a new vision of PA Bigsby for guitarists now, and his vintage gibson amp collection along with his vids of licks from Charlie Christian, Django, Jimmy Rivers and Junior Barnard have my mind in a whirl of; "what if I take this wood, and that metal, and this body shape, and that neck, and these pickups.. and I take that amp sound and that style of strumming with these strings,etc etc.."   A bit insane, border line mad man? No.. rather pure INspire-ation.

The the guitar pics I shared above you see a progression. And below you see where I have arrived. With the help of Deke Dickerson and his bigsbyfiles.blogspot.com  he led me to the AMAZING story of a man that had his paradigm shift when he moved to southern california and began to experience the California western swing front, and he was grabbed by PA Bigsby. In this fascinating story archived by Deke Dickerson on his blog Musings of a Muleskinner he shares about the life of one JIM HARVEY and his beautiful instruments. You HAVE to read it, click the link after you finish my blog read and fall in love..
Tough old men and birdseye maple- The Jim Harvey Story 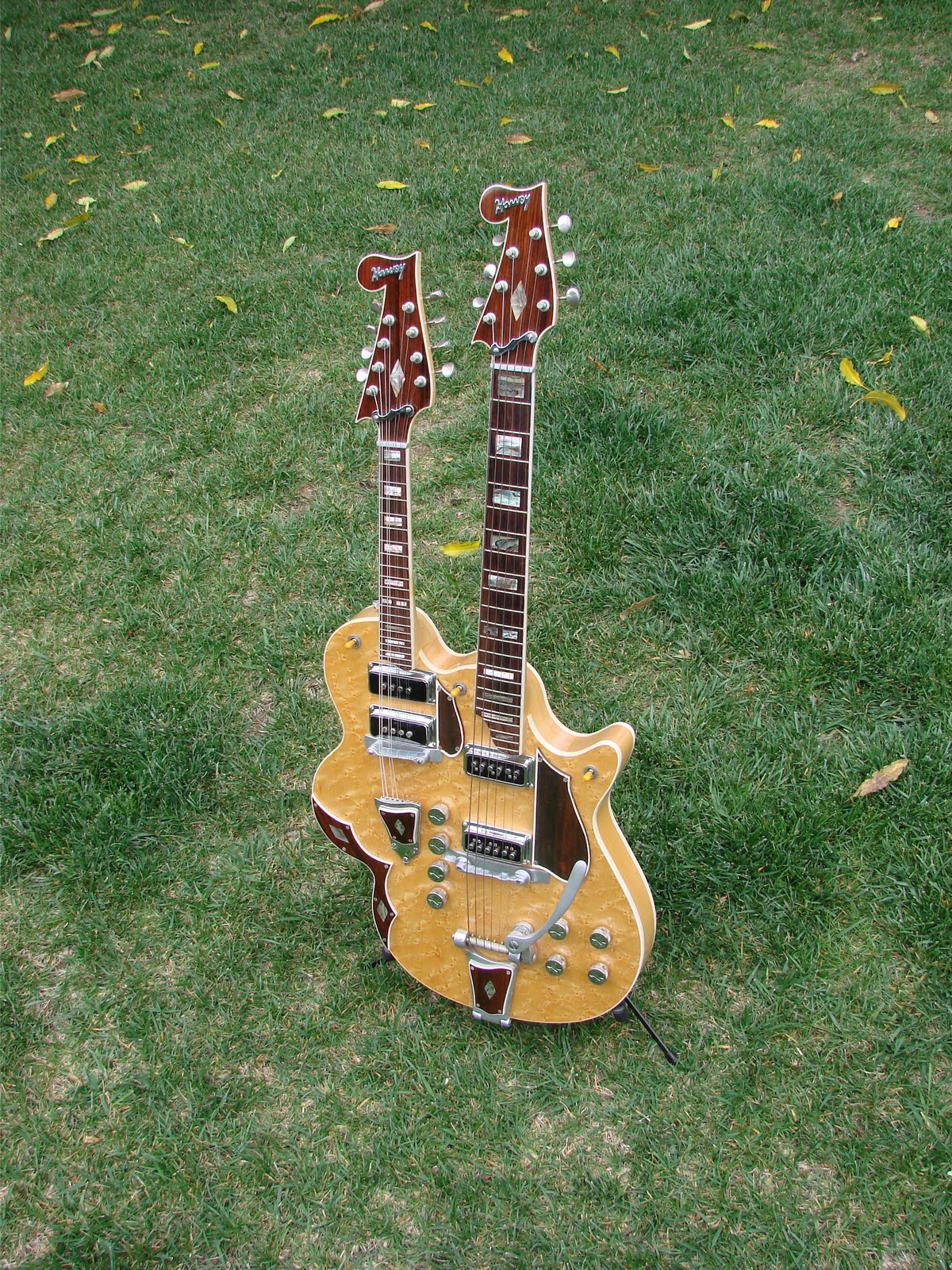 my idea of mixing a Bigsby style guitar and vintage Gretsch Roundup (jet) became a realization once I got the ball rolling with one of TK Smiths fantastic Smith guitar necks, his CC II pickups, and a body built by Marc Rutters (www.ruttersguitars.com) from a 54 roundup template. I took my picts of PA Bigsby guitars, Jim Harvey guitars and asked for a flat top version of the gretsch body using birdseye maple cap on sugarpine. The sugarpine has a unique "knocky" semi hollow sound to it that I love. I put it all together with
a custom Tru-Arc bigsby bridge from another gear shaman; Tim Harmon, and a reconstituted B-7 (Marc helped big time on this, pulled the pins, drilled the bar and milled the bottom of the plate flat) and look what my obsession delivered.
Like it or not, you are witness to 100% action = 100% reaction, 100% of the time.

This guitar is all me because I live for gretsch guitars and love telecasters, more so telecasters that are a bigsby influence. Dare I say TK Smith influence. :) So you have a Gretsch roundup body but its top is flat and bolted to neck like a telecaster, I love bolt on necks. All the controls and bigsby are Gretsch and then this Smith neck is shaped like TK's 47 epiphone like Junior Barnards of the Texas Playboys. The headstock and style all ooze PA Bigsby but are different enough that they are pure TK Smith. The Pickups look and respond like a vintage gibson Charlie Christian pickup down to the big ass steel bottom plate but Paul Bigsby's tone is totally there too.  In the next blog I'm going to
share what also emerged in the middle of the guitar building fun, as I bought
a pair of 1939 and 41' Gibson EH-185 amps because of TK Smith turning me onto them. It was natural as a guitar electronics company for me to want to bring this ancient amp into new light. a 2 1/2yr journey with that led to the production of the MOONSHINE '39 amplifier. http://thenocturnebrain.com/moonshine.htm .

You can hear a comparison vid between my original Gibson EH-185 amps that I used as the models to build the Nocturne MOONSHINE '39 amp combo and shinebox head. Masterful jump blues / rockabilly guitarist; Tommy Harkenrider of www.tommyharkenriderguitar.com was so cool to demonstrate them with
his Grez guitar. At the end of the demo, Tommy picks up my Grigsby guitar and gives it a try through the 6x9" shinebox amp head. More on that later.

Posted by the NOCTURNE Brain Seltzer at 2:27 PM