I'll start by suggesting that you go get a mug of tea or coffee, Below is my typical ramble of words and thoughts thrown out on a given subject, this time is about my newest build; THE MYSTERY BRAIN BS-301 japanese vintage preamp and digi tape echo simulator!
While I might not be the only one, I was the 1st one to take apart the long out of production, vintage roland re-301 space echo and redesign the little preamp in it to not only work w the proper impedance for a guitar, bass, steel, etc instrument, I also gave it a cool little bass cut control that isnt on a real space echo. There is a bass and treble control on an RE-301 but.. it only functions on the wet/affected signal. Not the preamp. I started that 9 yrs ago and only a handful of rockabilly and brain seltzer fans were curious, but then other genres of guitarists began to realize that even if you dont care about rockabilly or hollowbodies, this thing sounds pretty awesome w a tele, Lp n strat too.
Over the yrs I have been asked over and over, why dont you just make the whole thing happen? Why not add a delay to it and complete it. Well, its 2016 and I finally have w the help of a brilliant friend who's very much into tape machines, more so the echoplex but never the less together I am able to bring you this Vintage Japanese Preamp/ Digi Tape Echo!  I loooove japanese tape echo machines!!

(option:  watch the 12 min video below..that might be shorter hah! ) 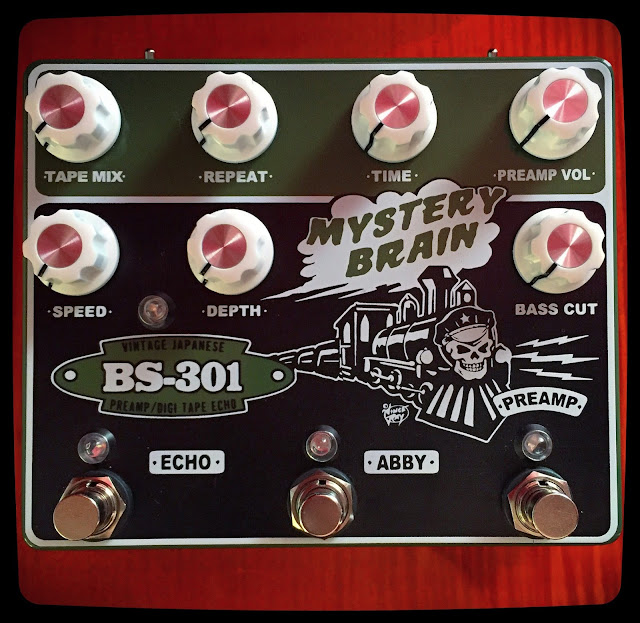 A more involved version of the Dynobrain BS-301 preamp meets Atomic Brain and gets a cool Tape Echo w modulation!! 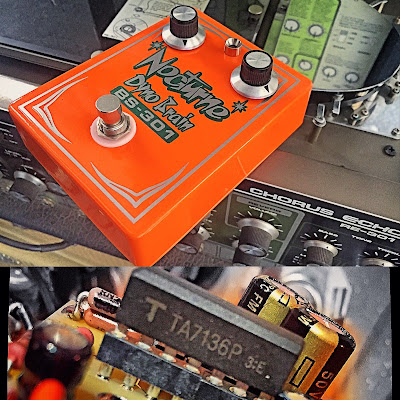 Ya so... 100% analog vintage tone, texture and dynamic replication of the 70's Japanese RE-301 Space echo PREAMP w a boost mode, AND a digi Tape echo sim using analog photocell modulation for chorus or vibrato in the slapback.
I've added a DB cut/clean switch if you want less saturated attack going into the front of the delay circuit. This lo res digi tape emulator has been tweaked to let the brawn and mids attack of the Brain preamp hit it hard and saturate to the point of slightly overdriving the slapback and giving more smear to the response. Slight but its there so sweetly, an unusual quality not found in most basic digital delay pedals. In addition there is a defeatable (toggles on and off) modulation circuit that affects the wet signal of the echo repeats and interacts with the emulators Mix, Repeat, and Time functions. This allows subtle shimmer, dimensional chorus all the way to fast trem pulse and off kilter vibrato at slower deeper rates. To be straight up, this cool analog photocell modulation was added just to make the Brain Preamp sound like my actual 301 Tape echo, I built this pedal around. All the other fun stuff it creates is a bonus palette of effect and space.  If that isnt something you need on all the time, just turn it off and get a smidge more delay time.   Rates from about 15ms - 600ms tape delay times. Bathtub funk to vintage Gallup and Scotty tape slap, to full blown Brain Seltzer Orchestral Neo-Billy all the way to 70's/80's vintage DMM'ish Edge vibe and Space Rock.

An added joy unique to this box is that the Abby Mode on the Atomic Brain section, really takes on an almost light overdrive boost when the Tape echo emulator is engaged and the Bass Cut is all the way to the right at 5 oclock. Like the vintage bassman rig that clips in the upper mids but stays fat and woody in the lows.. I swear this thing carries that ghost but I want to be careful not to go down a path of hyperbole, this wont turn you into Brain Seltzer, there's more involved haha.  This Mystery Brain BS-301 is solid 18 yr journey of chasing that particular guitarists tone and texture, more so his unique pick attack and dynamic control. Born out of love for my upbringing in vintage roots rock (gospel, surf, Honky Tonk, neo-rockabilly) and STP, what? Yep, its been developed on stage in front of weekly live audiences, honed and refined for many yrs as a pedal builder. I've had many a space echo, and this one has been torn down many times. Most recently the motor needed servicing. More reason to just have a pedal version of this old beast!
https://www.instagram.com/p/BIuK8_hDQvF/?taken-by=thenocturnebrain
https://www.instagram.com/p/BJi4ZeUDQs3/?taken-by=thenocturnebrain

I've replicated the sounds and response of the famous japanese 301 space echo and for a limited time, even w the original NOS Toshiba TA7136 analog op-amp.

Its hard to find these chips and there are chinese fakes out there. I've been collecting my supply for 8yrs. Honestly there is hardly any difference between this chip and the more modern LM-741 variety. B#SS stopped using the TA7136 and moved to the LM-741 when production stopped on the TA chip and nothing was missed (ie my black label DS-1 pedal). If you'd rather have the quieter and higher audio grade Burr Brown OPA chip, let me know in the notes to seller and I'll put that in instead. Its my preference, but if you want the fun of having the NOS chip, thats what you'll get. :)  I'm all about fixing the things that need fixing in the original, so you will find top audio grade, low tolerance xicon or vishay metal film resistors, metal film caps, even an audiophile burr brown opamp in the front of the delay w vishay metal film tone cap.  Not to worry though, all the vintage feel, touch dynamics and response of the original 301 are here. No Baloney just tone and once you stomp it on, you will never turn it off. "Every guitar I own sounds like more of itself, a more better pedal is what this is and I never turn if off" - to quote Brain preamp owners.

The Second batch goes on sale Nov 25th at midnight here on my website:
http://www.thenocturnebrain.com/collections/pedals

*thanks to Joe Carducci of Gretsch for filming and producing this video, as well as Tim Harman of Tru-Arc bridges for being the interviewer and guitar demo riffer. His Gretsch Jet sounds so good through the Mystery Brain and my Moonshine '39 1x12 combo) ..also props to Timmy on the Gretsch Bass, and Dave Miller for letting me use his D-cut falcon, I want one!)


note: graphics logo done by the master of low brow Art & Album covers all over the globe, Vince Ray @ http://www.thevincerayexperience.com/
Posted by the NOCTURNE Brain Seltzer at 2:34 PM